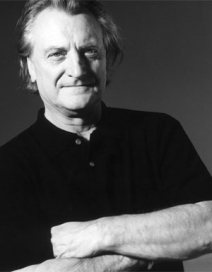 Bořek Šípek is a world-wide known architect, designer, visionary, cosmopolitan, self-made man, and we could use many other characteristics at this place. However, according to his colleagues and friends, Bořek Šípek is especially a good man with a great personality
The life of Bořek Šípek is a typical story about big world self-made men. He is often compared to a male Cinderella. At the age of fifteen, he became an orphan (both mother and father died of cancer). At nineteen, having nothing, he emigrated to Germany. Before emigrating he had graduated from an applied arts secondary school in Prague in the field of furniture construction. And he really made use of his studies. Before entering the university in Germany, he worked as a cabinetmaker. Thanks to the scholarship, he graduated from architecture in Hamburg and philosophy in Stuttgart. He taught design at universities in Hannover, Essen and then in Prague for many years. From 2005 he is the Dean of the Faculty of Architecture at the Technical University in Liberec, Czech Republic.
Šípek’s first significant success was a glass house that he had built for his sister, for which he was awarded the German Architecture Prize in 1984. The world opened up for him and he moved to Amsterdam because he was attracted to the liberal atmosphere of this cosmopolitan city. In the middle of eighties he was contacted by the most prestigious Italian design company Driade. Cooperation with Driade was the beginning of the skyrocketing career of “the most distinguished contemporary designer” who “evokes the longing for magic in this horrid realistic world”. Driade published his new catalogue where Šípek’s work was on offer, which proved his importance to the company. At that time, only four people had their own catalogue – French Philippe Starck, Spanish Oscar Tusquets, Italian Antonia Astori, and Czech Boﬁek Šípek. Also thanks to the name Driade, people became more interested in his work and orders from other known and unknown firms soon came in. The Netherlands was struck by the Sipek-mania a Sipek started to aim at exclusive products produced in small quantities; he especially like to design chairs or other pieces of furniture, cutlery, glass, china, vases or lamps and other home accessories. And thanks to Driade, Šípek was also able to explore Asia and his own passion for Asian culture and eastern thinking in general.
However, Bořek Šípek has always felt like an architect more than a designer. It remained so until today. He has a simple explanation for it: design consists of packing things into a form and he does not pack. Architecture is a space creation for him and design was earlier a natural part of architecture. Architects, according to Bořek Šípek, forget how powerful they are. ” Architecture has the power to manipulate people positively. When I produce an object, I am interested in how it will influence people. Architecture has such a power, much more than any other art. Architects can play with people, guiding them through the house as they need. Different rooms and places have different characters and people have different feelings in them. When we enter a theatre, we should have a different feeling than when we enter a bedroom or an office.”
As regards contemporary architecture, Šípek says: “When architecture is based on tradition, when it comes from it, even a simple man understands it. I try to interpret new contexts in a new way. It is much closer to me to newly explain something that has roots than to experiment. Tradition has always been a greater inspiration for me than experimentation. During the Renaissance, it was said that in front of a church, there must be at least four steps. You can learn a lot from this because going upstairs means nobleness. The architect and the solution he chooses make the difference. When I draw stairs in front of the building, it means that people will enter the building with a different feeling than when they enter it directly. I can let them enter quickly or slowly…”
The main reason of his success in the field of architecture and design is hidden in the following sentence: “If you cannot start again and again, you end up in a routine. I like being unrestricted. The only restrictions that I welcome and that stimulate me are within the borders of the given order. I come out of it and I submit to it. My first two emigrations taught met his.”